Thankful for My Italian Connection 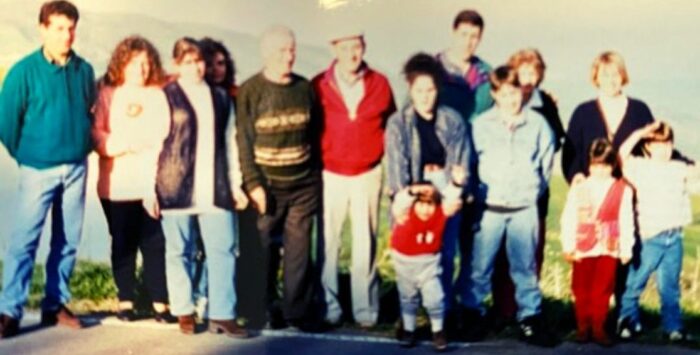 This picture is with many of the family we met that day. My dad in the middle is wearing a hat. The man to his right was his first cousin with the identical name, Nunzio. I’m wearing the green jacket hugging my mom. My son, Andy, is in front of me in the denim shirt. My wife at the time is next to my mom. My other son, Tim, is in front of her.

On my first morning in Palermo, the man at the front desk greeted me kindly.

“Buongiorno,” I replied, “Can you direct me to a phonebook, please?”

As I scrolled through the names, I felt nervous. When I finally got to “C,” I slowed down and then I stopped. Above my index finger was my surname, here in Palermo!

My entire life I had heard stories about my family coming from a Sicilian city called Palermo. I imagined one day I would go to that city and see where my family lived and grew up. However, I never thought I might meet a relative who still lived there. I couldn’t believe it. I stared at the name for what felt like an eternity. Could this person, Giuseppina Canalicchio, whose name was staring back at me, actually be a family member?

I went back to the front desk.

“Excuse me, signore, would you be kind enough to call this phone number and ask the person who answers if they know a Nunzio Canalicchio? He was my grandfather who left Sicily about 100 years ago and made his way to America. I am hoping to find my family.”

“Si, signore. It would be my pleasure,” he said as he dialed. I waited, breathless, to see if someone would answer.

“Si, signore…” He went off in a back-and-forth conversation.

He hung up the phone, looked me in the eyes and said, “They want you to go over right now.” He handed me the address and told me they lived about fifteen minutes away.

Was this for real? I was frozen in disbelief and elated with hope. Who wanted to meet me?

I quickly located my friend, Tommy, who was here with me on our Naval Reserve annual training. After a week of flying throughout the Mediterranean, we had earned two days off. I convinced Tommy and the rest of the crew to take a road trip to explore Palermo on the northwest part of the island.  Arriving at the address, we saw them immediately: an elderly couple – both of them short, both of them smiling.

Their Italian was fast, and ours was nonexistent. Growing up in America, our parents never spoke Italian to us, and this was before Google translate came into existence. Thankfully, Tommy and I had no trouble translating their excitement. Gesturing us into their home, they brought out coffee, cookies, and cakes. We smiled, ate, and laughed. They were so friendly! Despite our best efforts, we had no idea who they were.

After a few hand gestures, Tommy got our hostess to give him their phone. He placed a call and thankfully, his mom answered. Tommy handed the phone to our hostess, and the two of them went back and forth for what seemed like hours. The conversation stopped, the woman smiling. Tommy’s mom explained the conversation. My grandfather, Nunzio Canalichio, had three siblings. Two sisters and a baby brother. The brother, Giuseppe, was sixteen years younger than my grandfather. When the day arrived for my grandfather and two great aunts to leave for America, they were forced to leave their baby brother behind. Our hostess was Giuseppe’s daughter. Her name was Giuseppina. I sat silent for almost a minute in disbelief, my body shaking. It finally began to sink in. This sweet woman we’d been visiting for the past two hours was my father’s first cousin. Dad had no idea he had had an uncle who lived in Palermo. None of us did.

Two years later, I would take my wife, two sons and parents to Sicily to meet the family. When they got home, my father wrote a story about the trip. It was the highlight of his life. Sadly, he died the following year, so we never spoke much more about it. In 2017, I took my twin daughters who were born two years after dad died to Sicily. My experience the second time was equally amazing. Our cousins had only one request before we left.

“Would you please not wait twenty-two years to come back?”

I think of this story all the time when I’m hesitant to do something in my career that feels scary. I am thankful I acted. I am thankful for all the love we had waiting for us in Italy, and all the connection.

Imagine if I hadn’t opened that phone book.

Remember that when you’re afraid to take a chance on something you believe in. You, too, will be thankful. 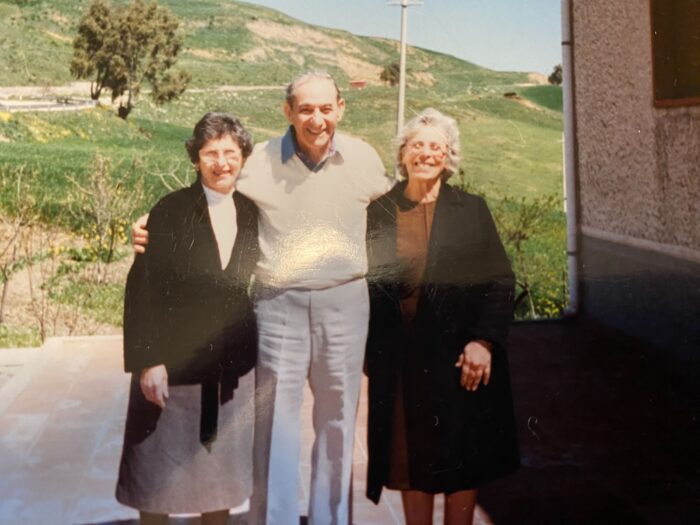 The dark haired woman is Giuseppina, the sweet woman I met with her husband on my first trip. Dad is in the middle and Conchetta, another first cousin, is to his left. 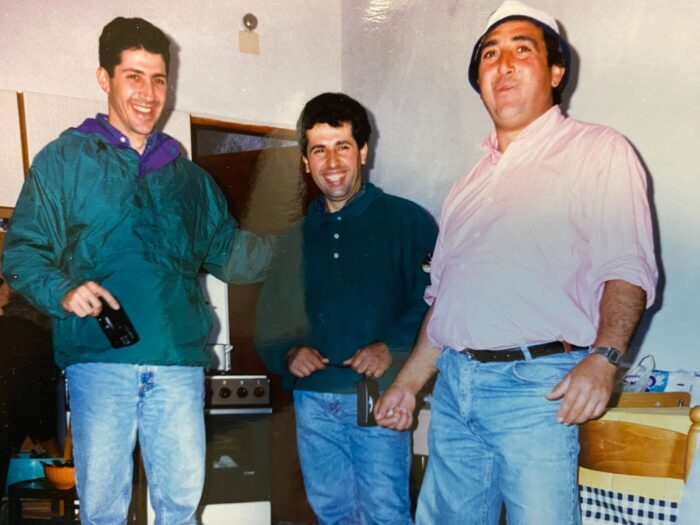 Here I am laughing with my second cousins, once removed: Giuseppe next to me and Giorgio, the husband of Consiglia, Giuseppe’s sister. Giuseppe and Consiglia were the children of Rosario Canalicchio, another one of dad’s first cousins who we met that day.