America: A history of Overcomers 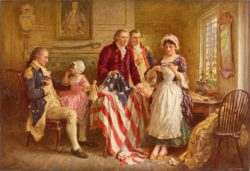 BrandAlive exists for the Overcomer–the entrepreneur, business owner, idea generator who believes in their brand, envisions its potential and strives toward its growth. Individuals who believe in something larger than themselves, who ask the questions “what do I and my brand represent, what do I hope to represent, and how do I accomplish such?”

If there’s one thing we can be confident of at this moment in history, it’s that every American is asking themselves those same questions: “what does America stand for?” and, more importantly, “what do I want it to stand for?” For some, these are easy questions to answer. For others, they require more thought and consideration. It’s a heavy task, contemplating the pillars of the nation we reside and function in, but it’s also not a new task.

July 4th–Independence Day–is a day on which we recite the stories of the Founding Fathers, are taught new stories of those who weren’t in “the room where it happened,” and are reminded of the unique ability we possess as Americans to write stories never seen before. And isn’t that what this country was built for–the Overcomer, the ordinary, the unexpected believing in our nation, envisioning its potential, and striving toward its growth?

It’s a peculiar thing thinking of the U.S. as a brand, but I wonder what Betsy Ross–a widowed woman who otherwise wouldn’t have a place in history–was thinking as she sewed the very symbol of the American nation. I imagine she asked the question “what does this flag represent, what do I believe it should represent?”

And what about George Washington, Jackie Robinson, Susan B. Anthony, Martin Luther King Jr., Jane Addams, Abraham Lincoln, and the countless other Overcomers, past and present? Or even those like Ernest Hemingway who uniquely transformed the very way through which we tell our American stories? I’m inclined to think they asked themselves “how can I witness the United States expand, grow and thrive?”

So today, our Independence Day, let’s remember the stories of those before us, of a nation that has grown and thrived, and let’s ask ourselves “what’s next, what chapter do I–the Overcomer–want to write?” And maybe when the hot dogs are gone and the fireworks settle, we still remember all of those that came before us and, like them, we find ways to answer the daunting questions before us, knowing we have the freedom to do so.